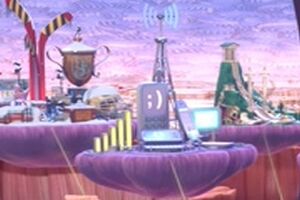 Social Media Island is one of Riley's new Islands of Personality seen near the end of the movie. It is situated between Hockey Island and Honesty Island and is dominated by a radio tower capped with the icon for networks. It also has the icon known as "bars", a cell phone a tablet and a computer.
Although it is seen, it is not specifically mentioned.

Retrieved from "https://insideout.fandom.com/wiki/Social_Media_Island?oldid=7875"
Community content is available under CC-BY-SA unless otherwise noted.