His job (real life), Being locked in the Subconscious (mind)

Jangles the Clown (or simply Jangles) is the secondary antagonist of the 2015 Disney/Pixar film, Inside Out. He is one of Riley's darkest fears.

As a twisted figment of Riley's encounter with clowns, Jangles is a giant clown with blue hair, a white face with a creepy smile, a large red nose, and bright green eyes. He is dressed in a red top and blue polka-dot pants with big floppy shoes and carries a huge mallet.

In real life, Jangles was an entertainer who attended 6 years of drama school prior to his job. When he was hired for Riley's third birthday party, Riley became so scared of him that it traumatized her. The experience created a psychotic, exaggerated version of him within Riley's mind and was kept in Subconscious. When Bing Bong is put into Subconscious, he is imprisoned on top of the slumbering Jangles. After Joy and Sadness rescue him from Jangles, Joy wakes him up to get Riley awake so they can use the Train of Thought to get back to Headquarters. Luring Jangles into Dream Productions, Riley captures his image in her dreams and wakes up. Joy, Sadness and Bing Bong then hop on the train and escape the rampaging Jangles.

During the credits scene, the real Jangles is seen at a birthday party. A look into his mind reveals he secretly hates his job. 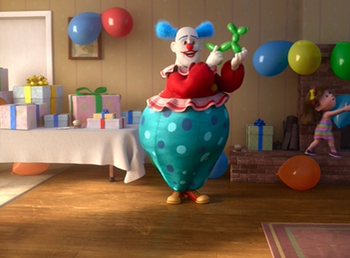 Inside Out has a collection of images and media related to Jangles the Clown.

Retrieved from "https://insideout.fandom.com/wiki/Jangles_the_Clown?oldid=8289"
Community content is available under CC-BY-SA unless otherwise noted.